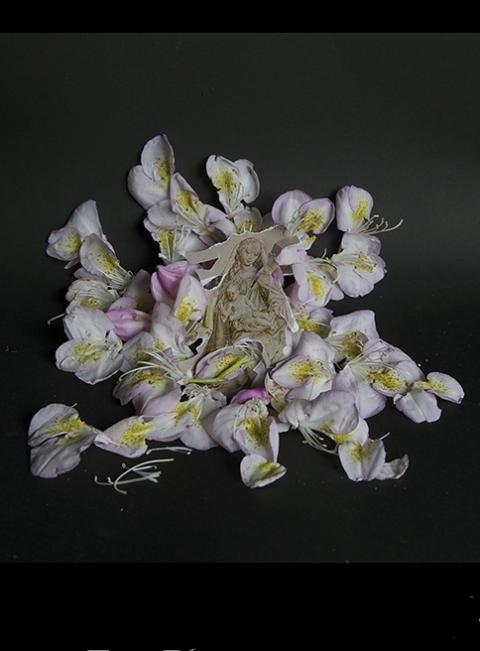 Marc Mulders (Tilburg, 1958) is a painter and glazier. He works in a tradition to which he feels indebted and which leads him to classical themes. The two works in Zwijsen Building refer to 17th century Dutch painting, where flower still lifes and scenes with game and fowl were very popular. Such subjects were not only chosen for their picturesque quality, but also because they made people aware of the finite nature of things. After all, flowers wither and every creature is mortal.

Marc Mulders has revisited that theme in a contemporary way, by making collages from photographs, clippings, and parts of images of old paintings. What further deviates from the old traditions is that, at the heart of the collages, there are important symbols that are of great significance to Mulders. For example, among the flower leaves we see Mary with child. Both are not depicted very prominently and seem almost to be hidden in flowers that are often associated with Mary. As if she matters less but has not disappeared.

At the time, the decision to place these motifs in the background was related to the criticism Mulders received for the distinctly Christian theme of his work, in which he was also a declared advocate of craftsmanship in art. His painted, expressionist canvases gave way to more subdued work, including photography and clippings.

In the work with the partridges (2006), we see a cutout showing a horseman of death—the fourth horseman from the Apocalypse—the Revelation—described in the New Testament. With this, Mulders deals with a familiar theme in art: vanitas—Latin for vanity. Further common symbols of vanitas: skulls, wilted flowers and toppled glasses with squandered wine. This imagery was partly borrowed from the metaphors of Dutch writers and poets such as Hooft and Vondel. These texts and images were a more or less veiled exhortation to live soberly and to focus more on the eternal than on the mundane.

Mulders is a prominent artist who also produced a tapestry and several smaller works for the Tilburg School of Catholic Theology in Utrecht. His work is included in various collections, including the Stedelijk Museum in Amsterdam and De Pont in Tilburg. The latter museum devoted exhibitions to his oeuvre in 2008 and 2020.