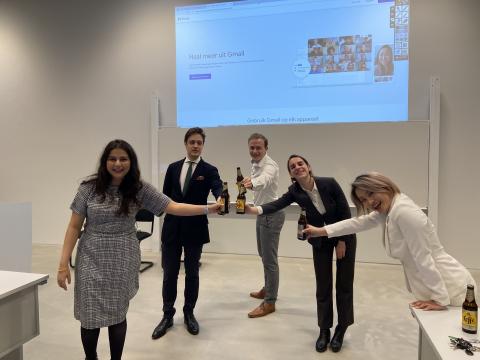 'We were not expecting to win the competition'

On behalf of the team, student Reuben Hofman shares his experience on participating in the competition:

"The Comparative Law in Action Competition organized by IE Madrid challenged the entire group to think outside the box in providing a cutting-edge solution to the multi-dimensional crisis faced by Lalaland. Although based on a fictional case, real life problems needed to be addressed such as electoral system design and the challenges posed by deep fakes and fake news. The assignment consisted  of a written report and an oral presentation. The written report taught us how to write clearly and concisely. By presenting our ideas before a panel of distinguished judges, we demonstrated a fundamental understanding of the issues at play and were also able to practice our presentation skills.

Having prepared thoroughly for the Competition Day, the final presentation went very well. However, considering that we were bachelor students up against master students of highly ranked universities from all around the world, we were not expecting to win the competition.  Nevertheless, our endless hours of work paid off in the end. Our feelings upon winning the competition were first and foremost that we were so honored and humbled to be the delegation that represented Tilburg University. We were also very happy that we could make our coach, Ms. Shanya Ruhela, and Professor Goodwin incredibly proud. In addition, we were thankful to IEMadrid for providing the opportunity to develop and challenge ourselves intellectually."

Dutch Ambassador Jan Versteeg, who was a member of the jury,  sent the winning team his congratulations: