Values, Communities & the War in Ukraine

The war in Ukraine sends a shockwave through our political and ideological landscape. It urges us to make an inventory of dominant values and to a renewed search for understanding the different narratives at hand. (English / SG-Certificate*)

Register for this meeting

Russia’s invasion in Ukraine has revitalized tensions in Europe and beyond, that many had thought had been buried with the end of the Cold War and the collapse of the Soviet Union around 1990. Thirty years later, the war sends a shockwave through our political and ideological landscape.

It urges us to make an inventory of dominant values and to a renewed search for understanding the different narratives at hand. 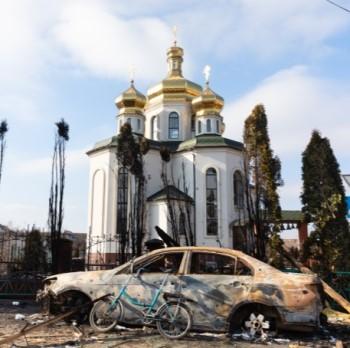 Vladimir Putin legitimizes Ukraine's current invasion by arguing that Ukraine is closer to Russia than to Europe, and that the two countries are separated only by an artificial border. That raises the question of whether Ukrainian values resemble those of the rest of Europe, or more closely resemble those of Russia? Dr. Tim Reeskens is looking for answers on the basis of European Values Studies.

Common grounds (in the east)

Dr. Karim Schelkens will focus on the historical backgrounds of the narratives of the President of the Russian Federation, Vladimir Putin, and the way it relates to the discourse of a ‘metaphysical’ anti-western struggle in the words of the patriarch of Moscow, Kirill. Karim Schelkens will highlight the common ideology of Putin and Kirill to legitimize the Ukrainian invasion, and how it the history of relationships between communities in Russia and Ukraine during the Cold War leaves its traces in the present-day conflict.

This program is organized by Studium Generale.

The war in Ukraine is having a great impact on students at Tilburg University.

Help these students and make a donation