CUBE is an education and self-study center designed by KAAN Architects. 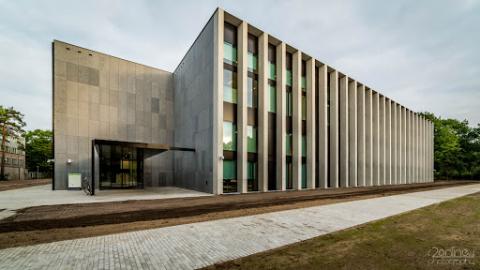 Opened in 2018, the building is square in plan and relatively low with two stories, like several other buildings on campus. The 11,000-square-foot building will allow the university to better facilitate its ever-growing student population. The new building refers to Cobbenhagen Building, yet differs from it substantially. In the oldest building on the campus, Bedaux embedded two patios—inner gardens—in the building, referring to the inner gardens of classical antiquity and the Middle Ages—where the garden was a place for study and reflection. Patios also play a major role in Kaan's work. However, his building seems to merge into the natural environment rather than referring to it. This is achieved by the large glass walls that not only offer a view of the small patios, but also of the greenery of the campus itself. Bedaux's building is sometimes called monastic, because of its seclusion, long corridors and subdued light. CUBE, on the other hand, is much more open in nature, the inner and outer worlds permanently blending into one another. The building is a metaphor for transparency, which cannot be said of the old, rather monastic Cobbenhagen Building.

CUBE has large and small lecture halls, workstations and state-of-the art facilities for approximately 2,500 students and faculty. As in the oldest building, the corridors and halls are wide and high, but considerably lighter. Recordings exist of the construction. A textile artwork by Sigrid Calon was installed in the hall of the building in 2020. It refers to a principle from the Educational Vision: weaving character. And that in turn stands for the ambition of the university to teach students more than knowledge or skills.