The building dates from 1998 and was designed by the Belgian architect Kieckens. It has been the home of TIAS School for Business and Society from the beginning. 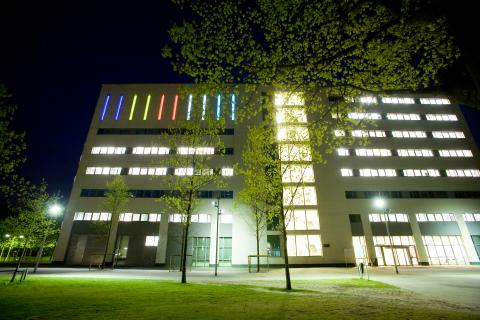 The business school aims to help people and organizations in their transition to “business with a purpose”: companies that operate less isolated from society and want a new balance between their social role and their own sustainable return.

What is now called Tias began in 1982 as Diogenes. Professor of Psychology Harry Peeters (1921-2012) was the initiator and initially had quite a different idea in mind: a fund for Scientific Research for Unemployed Academics, which was to finance PhD projects—with retention of benefits—in order to protect students from unemployment. The then minister Deetman had offered 250,000 guilders for this work experience project.

This gave rise to the idea that the university could also capitalize on the interaction with practice by offering postgraduate programs. In 1984, the name was changed to Tilburg Institute for Academic Studies, after which the range of programs was expanded considerably and branches were opened in other cities. In the hall of the building is the artwork Sharing Bread and Wine from 2003, which refers to the idea of cooperation and to the identity of the institution.