Antarctica is considered one of the Earth’s largest, most pristine remaining wildernesses. Yet since its formal discovery 200 years ago, the continent has seen accelerating human activity. Reporting in the journal Nature, a research team including Tilburg University show where human activities have been conducted and uncover two main concerns: wilderness in Antarctica is decreasing due to an increasing 'human footprint' and biodiversity is under pressure because species mainly depend on areas that are strongly influenced by humans. However, much opportunity exists to take swift action.

How widespread this human activity is across the Antarctic continent has never been quantified. We know Antarctica has no cities, agriculture or industry. But we have never had a good idea of where humans have been, how much of the continent remains untouched or largely unimpacted, and to what extent these largely unimpacted areas serve to protect biodiversity.

A team of researchers led by Monash University has changed all of that. Reporting on 15 July 2020 in the journal Nature, using a data set of 2.7 million human activity records, they show just how extensive human use of Antarctica has been over the last 200 years.

With the exception of some large areas mostly in the central parts of the continent, humans have set foot almost everywhere.

Although many of these visited areas have only been negligibly affected by people, biodiversity is not as well represented within them as it should be.

Lead author, Rachel Leihy, a PhD student in the Monash School of Biological Sciences, points out that ‘While the situation does not look promising initially, the outcomes show that much opportunity exists to take swift action to declare new protected areas for the conservation of both wilderness and biodiversity.’

Kees Bastmeijer, who works at Tilburg Law School, participated from a legal perspective: “Wilderness values ​​in Antarctica have a protected status under international law, but the 29 states that jointly manage Antarctica (including the Netherlands) are struggling to implement this. This research is an important incentive to stop the ever-increasing human footprint in Antarctica.” 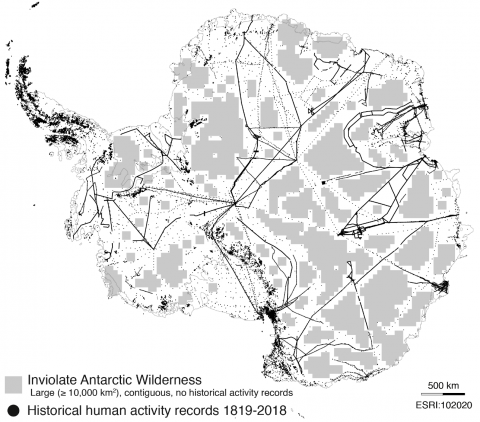 Figure: Two hundred years of human activity on the Antarctic continent. The black dots and lines represent human activity including traverses across the ice. The grey scale squares indicate areas where data suggest humans have not yet travelled.