Can conflict-related sexual violence and human trafficking be prevented?

In 2003, as a young legal scholar, Dr. Anne-Marie de Brouwer, currently a Research Fellow at Tilburg University, visited Tanzania and Rwanda. There she studied the workings of the International Tribunal that held those responsible for the Tutsi genocide to account and she observed the local Gacaca tribunals. “I was interested both in how the legal institutions operated and in the impact conflicts had. This is about women who were repeatedly raped and abused, who witnessed their families being murdered, and who lost their possessions and social networks.”

This research and studies of human trafficking and sexual violence in other conflict areas are De Brouwer’s contributions to the UN Sustainable Development Goals, specifically the goal of Peace, Justice, and Strong Institutions – which aims to encourage just, peaceful, and inclusive societies.  She is convinced these three conditions are crucial to preventing conflicts. “Sexual violence and human trafficking can be prevented by tackling poverty, gender inequality, and discrimination, and by improving education and prosecution.”

Genocide against Tutsis in Rwanda

In the spring of 1994, Hutu extremists murdered an estimated one million Tutsis and moderate Hutus. De Brouwer thoroughly studied the legal aspects of these crimes and the prosecution of sexual violence. “One of the things I did was interview survivors to learn what justice meant to them. Justice in the sense of punishing the offenders and those responsible is important, but I also wondered what more could be done. What else do survivors need to build a new life?”

Many wrestle with the fallout every day

She and her partner Freek Dekkers started the Mukomeze foundation. "We focus on female and male victims of sexual violence in Southern Rwanda. We offer work, study opportunities, and micro-credit loans so that survivors can start their own businesses. Work offers distraction and generates self-confidence and dignity. We do this as a partner of Solace Ministries, which started providing counselling immediately after the genocide by allowing victims to share experiences." This kind of help is still needed. "Many of them suffer the psychological and physical consequences of sexual violence on a daily basis. They are HIV-positive and have a higher risk of, for example, cancer due to a weakened immune system. Both are direct consequences of sexual violence."

The Gacaca tribunals were re-established after the genocide. Supported by new laws, these local tribunals dispense justice. "They contribute to recovery. A large number of survivors found out where their loved ones were buried so that they were finally able to say goodbye. Perpetrators who confessed to their crimes were allowed to convert a quarter of their punishment into community service. For example, they built houses for survivors. Meanwhile, the country is doing well; Hutus and Tutsis are marrying each other again just as they did before the genocide." 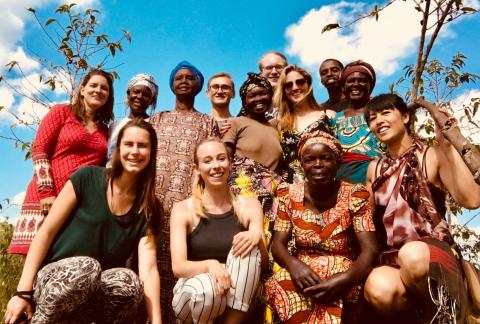 Earlier this year, De Brouwer worked with Eefje de Volder and Luan Vercruysse to set up the coffee company Het Bèkske: Rwandan Empowerment Coffee. They regularly involve third-year students from Tilburg University's Outreaching Honors Program in their work. "The local population receives three to four times as much compared to what they receive from most regular coffee brands. Five students went to Rwanda with us; they were very enthusiastic and impressed by the social impact of the company."

Bèkske is of exceptionally good quality (specialty coffee) and is available at various locations in Tilburg. "We hope to grow considerably in the coming years so that we can empower the women who grow the coffee.”

Within the IMPACT expertise center, De Brouwer works together with Eefje de Volder on combating human trafficking and sexual violence in conflict. They do so through research, training, education, and empowerment projects. They are currently developing an educational platform, among other things. "It will give students a better understanding of what sexual violence and human trafficking is and how it can be dealt with.”