In recent days, after the curfew was imposed, the Netherlands experienced the worst riots in 40 years,  accompanied by targeted violence against police officers as well as destruction and looting. What is the background of the violence, who are these rioters? And what can the government and politicians do to stem the discontent? An interdisciplinary analysis with sociologist Peter Achterberg, public administration experts Pieter Tops and Niels Karsten, Juliette Schaafsma, humanities, and social psychologist Florian van Leeuwen.

According to the scientists, the rioters consist of a very mixed group, although they are mainly young men who agitate against and are out for revenge, as social psychologist Florian van Leeuwen describes it: "The exceptional thing about the current riots is of course that the imposition of the curfew is not aimed at weakening or suppressing the political opposition but at curbing the pandemic. A small number of individuals experience the imposition of the curfew as repression, an unjustified curtailment of their freedom, which activates their revenge motivation, which drives them to aggression."

Pieter Tops, associate professor at the Hieronymus Academy of Data Science, warns that discontent can lead to a volatile situation, especially when larger groups come together. "In particular, the sometimes boundless aggression against the police and even against entrepreneurs is remarkable. This seems to be the result of a hardened street or counterculture rather than frustration with corona or government." 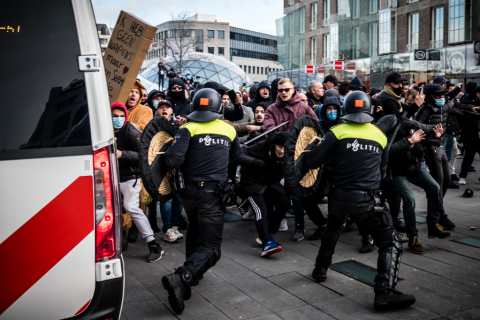 "This hardened street culture merges with parts of the world of (petty) criminals, hooligans, cut-throat conspiracy theorists and right-wing extremists. In ever-changing combinations. Of course there are also followers. Glorification of violence and radical denial of authority come together in their behavior. In doing so, they use corona resistance as a vehicle."

Peter Achterberg, Professor of Sociology (Tilburg School of Social and Behavioral Sciences). "What they share is a deep-seated anti-institutionalism. This is not only about criticism of the government, politics and administration, but also about other institutions: science (RIVM/OMT), the media (the NOS that can no longer carry logos, black lists of journalists) and the police."

"A broader discontent stems from 'uprooting', a phenomenon that has been written about in sociology for some time. Pim Fortuyn actually already wrote about it in his The Orphaned Society, but also in the (inter)national literature large-scale processes such as detraditionalization, globalization and individualization are pointed as background for tension on the relationship between (some) citizens and the once so authoritative institutions."

Juliette Schaafsma puts the riots in a broader context as well. She is a professor at the Tilburg School of Humanities and Digital Sciences. "There is no answer to the growing inequality, and no perspective of a solution to the problems of today. Big world visions like communism and liberalism have failed, religions have lost influence. Communities that traditionally protected people, where they felt at home and heard, are no longer there or have lost meaning.  The government has withdrawn and citizens have become responsible for their own lives. At the same time, the government has come to distrust citizens more and more, see for example the Social Benefits Affair, because of which the government had to resign. It should not be surprising if citizens lose their trust in the government."

"On top of all this then comes a crisis, magnified in the social media and requiring sacrifices from people in that same government. Groups that are disgruntled or would normally find their release elsewhere, such as at soccer, seek an outlet or a way to get attention."

In the short term, this obviously means tackling the violence, they say. Pieter Tops: "A golden rule from crisis management is to make a sharp distinction between those who want to cause trouble and the others. We must prevent them from uniting. More insight into the hardened street culture is another requirement; we simply know too little about it. How does this hardening express itself in the street, at school, in nightlife, in the family? Recognition of social inequality as a breeding ground is also part of it. And strengthening parental and other authority. These are all no small tasks."

"For the rest, criticism of the government, no matter how clumsily or irrationally formulated at times, is not only a fundamental right but also a condition for a healthy democracy. Let's not forget that there is also reason for this criticism: not only the curfew, but especially the handling of the vaccination program do not do much good to the confidence in the government: 'if they can't even regulate that'. And restraint in the choice of words would be to the credit of politicians, certainly those of the established parties; talking about a 'civil war' or - in a different context - about a 'banana monarchy' throws oil on the fire.”

Juliette Schaafsma: "It is not wise to attack the riots with war rhetoric. That strengthens the rioters in their right with their view of the government as their enemy. It is also important to find out what drives the various groups."

Peter Achterberg also argues for de-escalation. "Simply informing people better about the usefulness and necessity of corona policy will not work. After all, an old adage in communication science says: more information, more polarization. It will rather have to come from cooperation and compromises between (political) leaders from left to right who make it clear to their supporters that central institutions such as government, the rule of law, science, et cetera, can be criticized but not destroyed."

Niels Karsten, a specialist in political leadership, illustrates this with the reactions of several mayors. "There is a great desire to condemn the violence harshly, but the mayors do represent everyone. Designations like 'the foam of the earth' and raising the question of whether they should 'be given the title of human being' are not useful."

"That extraordinarily complicated aspect of the office was fleshed out much more explicitly by Mayor of Rotterdam Aboutaleb admonishing his city's rioters in a video on social media and addressing them directly on their conscience. Some may have missed the vehemence or experienced too much distance in this, but it is a type of leadership that will later allow him to better engage in conversation with the youth in question about what ultimately led them to these unacceptable outbursts of violence and to understand their social backgrounds." 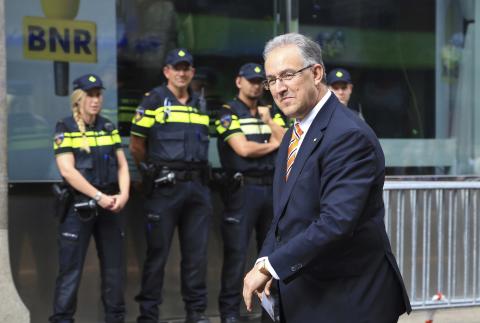 Yet reducing violence and discuss about it is not enough. In the long run, society needs "a new narrative, one that everyone can relate to," Juliette Schaafsma argues. "The government currently has no vision on major issues such as growing inequality and climate change, which will once again hit the less wealthy the hardest. Nor does it have an answer to the question of how we can once again show solidarity with each other. When the economy was doing well, the Netherlands did not have to make choices and a vision was less relevant. New government measures are now desperately needed to create unity again, to prevent different groups from standing against each other in society. That appeals to the collective."