In memory of Jan Blommaert

It is with deep sadness that we received the news that January 7th, 2021, Jan Blommaert passed away at the age of 59. The message that he sent us last March was short and to the point: “Friends, it looks as if I have terminal cancer. More news soon.” A ten months’ period of treatment with ups and downs followed and all the time Jan kept us informed through social media messages, interviews, and even a published account of what he deemed important in his scholarly life. 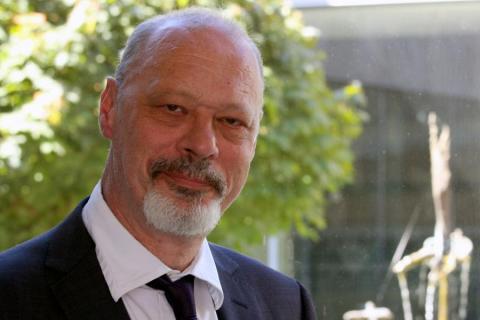 He also used the time that was left, bombarding us, as he himself called it, with little YouTube video clips in which he dealt with unfinished work and challenged us to continue where he had to stop. Watching these short clips clearly shows Jan’s tremendous impact in the field of sociolinguistics. He coined an almost endless list of concepts that highly contributed to a totally new perspective in the study of language in society.

He often referred to the concepts he proposed as “concepts looking for content”. That might sound like a joke and he indeed said it with a smile, but at the same time it showed the way in which Jan worked. He introduced or dealt with concepts like discourse, voice, repertoire, ideology, scale, indexicality, superdiversity, chronotopicity, interaction, accent, supervernacular, ethnographic linguistic landscaping, grassroots literacy, genre, intertextuality, framing, multimodality, the online offline nexus – to name a few –, added to their development but always left the opportunity for others to engage, contribute, accept, or reject his proposals. “It’s good to remember,” he said in his last interview, “that the moment you read something, in view of your article or book, that article or book is no longer like single authored, it’s collective, it’s made by you and by the author of the book or article you were reading.”

Jan Blommaert was born in Dendermonde, Belgium in 1961 and grew up in Brussels. He got his doctorate in African Philology and History at Ghent University in 1989 where he also was a Professor of African Linguistics and Sociolinguistics from 1997 to 2005. Then he moved to the Institute of Education, University of London as a Professor and chair of Languages in Education. In 2007 he was appointed Professor of Language, Culture and Globalization at the Department of Culture Studies, School of Humanities and Digital Sciences at Tilburg University where he in 2008 became the Director of Babylon, Center for the Study of Superdiversity. In addition, he held fellowships and visiting professorships at Gerhard-Mercator University Duisburg, University of Pretoria, University of Chicago, University of Jyväskylä, Beijing Language and Culture University, Hellenic American University, and the University of the Western Cape.

He gave dozens of plenary lectures as an invited speaker, delivered numerous section papers, and organized and chaired workshops and colloquia at conferences all over the world. He was an editorial or advisory board member of many international academic journals and book series. He wrote some twenty books, both academic and for a larger audience, published literally hundreds of academic articles – in print but also more and more through online media such as his website and Diggit Magazine, the online journal of the Department of Culture Studies that he co-founded in 2015.

Between 2005 and 2010 Jan wrote three books that I once heard him refer to as a trilogy: Discourse (2005), Grassroots Literacy (2008) and The Sociolinguistics of Globalization (2010). These books fundamentally changed our field from a sociolinguistics of stability into a sociolinguistics of mobility, dealing with all the complexities that processes of globalization and superdiversity bring to language, culture and society. In dealing with such complexities, Jan proposed an action perspective, i.e., starting from the data produced in real life interactions and from these data trying to make meaning, create understanding and ultimately give voice to those who produced such data – people at the margins, oppressed people, immigrants, refugees, minorities, victims of (institutional) racism.

In recent years, Jan added a new perspective to his work: the online offline nexus. Titles like Durkheim and the Internet (2018) and Online with Garfinkel (2019) bear witness of this new focus in which he used contemporary sociolinguistic insights to develop a new sociological imagination, exploring how we construct and operate in online spaces, and what the implications of this are for offline social practice. This online turn was coproduced with colleagues and PhD students who as of 2016 produced doctoral dissertations on a variety of topics related to online offline practices.

Jan’s research in the online offline nexus was clearly connected to his teaching. First of all to BA and MA students in the Online Culture programs of the Department of Culture Studies at Tilburg University but also to an impressive number of PhD students from all over the world. He was a devoted teacher who always took his students seriously, managed to arouse their curiosity, interest and enthusiasm and made them walk the extra mile for unraveling and understanding what it is that people actually do with language and culture in communicative interactions and encounters online and offline. Although being an internationally renowned and celebrated scholar with an incredibly full schedule, he always found or made the time to talk to his students on issues they found important.

Nevertheless, still more than a teacher, I think, Jan was a writer. He told me that he tried every day to devote some of his time to writing, early in the morning before day-to-day business caught him, late at night, or in time stolen from so many holidays. I think it is in writing that Jan found his main raison d’être, the final fulfillment of wanting to share his – as he himself said in an interview, often unfinished – thoughts and ideas and challenge his readers, students and colleagues alike, to discuss, complete, reject or elaborate on them, ultimately leading to a multitude of collective (open-access) authorships.

Jan was an international powerhouse, a social activist and at the same time a good, committed, solidary and honest colleague, always willing to help, advise and cooperate but also always ready to contribute his questions, doubts and critique – asked as well as unasked. He will be dearly missed by all who knew him personally – I will miss and remember our silly SMS routines during a match of the Dutch or Belgian national soccer team, his last minute Apps that he would be a bit late for  a meeting due to traffic or trains, the regular Academia and ResearchGate emails telling me ‘Jan Blommaert has published an article’, his casual ‘we should have a talk’ invitations to sit together with a cup of coffee and change the world, our joint travels to China, his wit and boyish sense of humor. He will also be remembered by many who never had the privilege of meeting him in person but know or will get to know him through his writings.

Our thoughts and compassion are with his wife Pika and his sons Frederik and Alexander who will no doubt miss him the most.

School of Humanities and Digital Sciences