It is customary at Christmas, for one of the theologians of Tilburg University to write a reflection. This year, Jos Moons will share his views on the gap in society, the contrasts for example between old and young, white and black, pro- and anti-vaxxers and how we can bridge them. Jos Moons works at the Department of Systematic Theology and Philosophy at the Tilburg School of Catholic Theology.

“That Kingdom of Yours, You know, anytime soon, You reckon?”, the late Dutch author Gerard Reve once sighed. A sentiment all too familiar to us: “The Christmas season, of Jesus and light and all that, any chance it’ll be jolly this year?” And who can blame us for asking? There are so many clouds blocking out the sun: the seemingly endless corona crisis, the climate crisis, Allowance-gate, and the persistent earthquake problems in Groningen – to say nothing of the perennial evils of poverty, loneliness, and discrimination. In our despondency we look for scapegoats. There are tensions. Anti-vaxxers, climate change deniers, and semi-racist populists are hell-bent on adding fuel to the fire. And so we ask: “This Christmas of Yours, God, where’s the party, You know?” 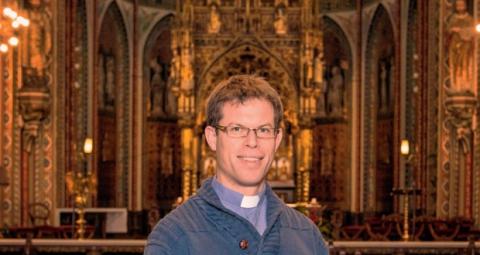 In the narrative that defines society today, the "I" takes center stage. There is a lot of freedom and there are fewer and fewer taboos. The downside of this trend is becoming increasingly clear: standards of decency are seen as restricting the “I” and its freedom. A poignant example recently occurred when in a Dutch House of Representatives debate the Islamic call to prayer, the Azan, was dismissed as "bleating". A deeply hurtful use of language serving no other purpose than to foment unrest. Another downside of foregrounding the "I" is that it makes us forget "us”. People who don’t get vaccinated can be heard talking about “my own choice”, seemingly unaware of how “my” choice also affects others, for example, people who are infected through me, or people whose surgery is cancelled.

The esteem in which the “I” is held is an achievement of modern times and it is to be treasured. It is deeply emancipating and underlies human rights. Anyone who gives the matter more than a second’s thought will see how much this evolution owes to the Christian conviction that God has a personal relationship with each human being (even if we can’t imagine how exactly He does that). As Christianity, too, sometimes struggles with personal freedom, the Enlightenment and its motto “Dare to think” (Sapere aude, an aspiration championed by Immanuel Kant) is justifiably acknowledged as a crucial step in the growing consciousness of the individual.

But the “I” is not the whole story. Sociology reminds us that no human being is an independent, self-sufficient island. Before I can choose my favorite pastry at the baker’s, many people had to have been involved to make that choice a reality. And psychology reminds us that humans are complex beings, with constructive and destructive sides to their characters. We can be wonderfully good, but also superficial, rude, and destructive. That is why we should not give free rein to our “I” and to hang with the consequences. Or in the traditions of Christian wisdom: not all of my inner stirrings – thoughts, desires, and so on – are worthy in and of themselves. Not everything I feel like doing or am inclined to do is also spiritually good: good for my soul, for my deeper self, and for others. Spontaneity is a good thing, but so is its opposite.

Head for the light and the good

This, I believe, points to an answer to the mournful question what the point would be of celebrating Christmas. It is not so much down to God, but to us. Please don’t get me wrong: this is not a universal call to worship or to keep the Ten Commandments (although I would obviously not object to either); it is a call to inner purity. Especially in a society that has lots of room for everything and that knows few commandments and prohibitions we should guard our spiritual hygiene.

Not to put too fine a point on it, there is much we’d be better off ignoring. One of the spiritual wisdoms is to be careful with anger, even justified anger. Before we know it, it drags us down and plunges us into darkness. In the language of Christmas, let’s be angry in a way that keeps an inner light burning. Another profound wisdom is that sometimes it is better to be silent, shake the dust off our feet, and move on. Casting pearls before swine is a waste of effort. It's better to quietly kindle the light where it is welcome. And to quietly continue to do good, despite everything.

Call it the mysticism of a straightforward orientation on the light, on the good, while discarding both the naivety of living under a rock and the strong impulse of getting carried away. That takes quite a bit of effort. It compels us to stay alert and to occasionally say "No" loud and clear to primary reactions, hurtful visions, or self-centered views, violence or despair. It can be a solitary journey, but it holds this promise: it will make us messengers of peace; mirrors of light; sages people gladly listen to; angels of goodness; instruments of connection. An image of God.