Anouk van Anrooij has wanted to be an entrepreneur for a long time. “I come from an entrepreneurial family; my parents own a company. During the first years of my studies, I was too busy to do business on the side.” When she heard about the competition, she asked Daniel to team up with her. The two complement each other well. Daniel: “We are both perfectionists and enjoy developing and creating, neither of us have a nine-to-five mentality. I bring in the academic perspective from my Research Master’s in Strategy and Anouk brings entrepreneurship. She’s always reminding you that money has to be made too.” Anouk is studying Strategic Management, specializing in Entrepreneurship, and Daniel is doing a Research Master’s in Strategy, a combination of a Master's and PhD track. During the Tilburg University Challenge finals, the duo presented their concept for the drink AnDa, a sustainable and healthy alternative to various soda beverages.

Because we wanted to keep it responsible and as circular as possible as well as work with residual streams, a lot fell by the way side

Major players in the soda market do not operate sustainably, and many consumers have a problem with the amount of sugar in drinks

Love for Design and Entrepreneurship

Freek van Litsenburg lives and eats consciously. “I eat little meat and am mindful of what I eat.” An idea had been buzzing around in his head for a while. “I wanted to sell a sustainably produced product and make a social impact. In the summer of 2020, the idea for Bigger Picture Clothing was born. In September I registered with the Chamber of Commerce. The preliminary phase of the competition started in January 2021. I thought there were cool prizes to be won, so I registered.” He says that winning two prizes was surprising. "I’m by myself: some of the other teams consisted of six people. I am especially happy with the involvement of my followers: they voted for my company in large numbers.” The student is expecting to complete his Master’s in Strategic Management, specializing in Consultancy, before the summer of 2022. 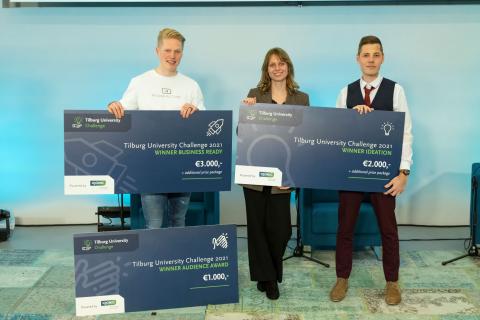 Sustainability and corporate social responsibility are intrinsic motivators for him. “Moreover, they have potential and there is a market for them.” Everything comes together for him in the design, production, and sale of clothing. “You can use it to symbolize something, to convey a message. It means I can express my love for design and entrepreneurship.”

Several ideas were discussed before Daniel and Anouk decided to dive into the beverage industry. Daniel: “Because we wanted to keep it responsible and as circular as possible as well as work with residual streams, a lot fell by the way side.” Soda turned out to have everything they were looking for. Anouk: “Major players in that market do not operate sustainably, and many consumers have a problem with the amount of sugar in drinks.” They continued to develop their idea during workshops and knowledge sessions. The most important aspect was discovering whether there is a market for it. Anouk: “We have grown a lot in our pitch, and I found the coaching sessions such as with the BOM very useful. They receive hundreds of requests every year from people who want to work in the beverage industry, so they wanted to know how we would approach it in detail.” Daniel: “The representatives of Vion Food Group noted that fruit peels, the basis for our drink, are not a residual product. We explained that our business model is completely based on the use of fruit peels, and that we expect that parties that throw away fruit would want to engage with us, as we would want to purchase large amounts.” The result was a focused pitch in which they presented AnDa as a healthy drink for students, without added sugars and with compostable packaging.

My company motto is: More than just clothing. You don't just buy clothes from me, you buy a bit of impact on both people and the planet

Freek launched the first of his Bigger Picture Clothing collections on August 10, 2021, consisting of two shirts, a sweater, and a hoodie. A loan from his mother enabled him to get started. The revenue and prize money are fully invested into his company. Of course, he wants to be able to earn a wage from it in the long term, and to be able to hire people, but it is also about making a contribution to a better world. “My company motto is: More than just clothing. You don't just buy clothes from me, you buy a bit of impact on both people and the planet.” A portion of the sales from each collection goes to a charity associated with his product. With his first collection, he supports an organization that is working to support the albino community in the Ivory Coast by producing sunscreen locally and then distributing it, among other things. “Ivory Coast is quite well known among my target group, which ranges from students and young professionals with a passion for sustainability to adults with the same passion. Ivory Coast is a large and therefore well-known country, most people have heard of it. I have incorporated colors of the Ivorian flag into my clothing.” His production is done in Portugal. “I visited the factory to see whether the working conditions are in order and the people are paid fairly; there are no children working and the cotton is organic.” Everything turned out to be fine. The factory runs largely on solar energy. What about the sales? “Things are going well in the run-up to the holidays. I'm happy.” He hopes to launch his second collection at the end of the first quarter of 2022. “The designs are ready.”

Sustainability is also an important starting point for the duo behind AnDa. Shaking up the beverage industry is what drives them. Anouk: “During the finals, we were asked whether we wanted to compete with companies such as Pepsi and Coca-Cola. We don't want that: we want them to change the product that’s hitting the shelves. If start-ups like ours grow enough, large producers will be shocked. It will encourage them to become more sustainable themselves. In five years, AnDa will either have stopped or be successful. "In any case, we are doing business together." They are now looking for investors so that they can make test drinks and taste them with a testing panel. They are confident that they will be successful. Daniel: “Our idea has already been assessed by critical experts and awarded with a prize.” The flavors of their drinks have been determined already. Anouk: "Apple-ginger-lemon, orange-elderflower, and orange-pear-cinnamon."

Freek hopes that his brand will have built up a good name in the Netherlands in five years' time. “In ten years I want to be active outside the Netherlands, preferably worldwide. By then, I hope not only to have a commercial success, but to have also started a movement. A community that is involved with my brand and actively thinks along. I will have swapped the laundry room in my student house out for a commercial building.”

Do you want to stay informed about entrepreneurship within Tilburg University?

By subscribing to our community we will keep you up to date about entrepreneurship with the latest news, upcoming events and other inspiring stories.