On Friday, May 13, 2022, university professor Dr. Ernst Hirsch Ballin received the university medal for his many years of outstanding service to the university during his farewell from Tilburg University. In addition, the Mayor of Tilburg presented Professor Hirsch Ballin with the insigna of the royal honor conferred upon him: he was appointed a Commander in the Order of Orange-Nassau.

Professor Ernst Hirsch Ballin was presented with the university medal by Rector Magnificus and President of the Executive Board Wim van de Donk for his many years of outstanding service to Tilburg University. Professor Hirsch Ballin has been affiliated to Tilburg University for more than 40 years, ever since his first appointment in 1981 as Professor of Constitutional and Administrative Law. Apart from interruptions given his work at the Dutch Council of State, his Ministerships, and his many social and academic positions, he has been of great significance for the university all these years. 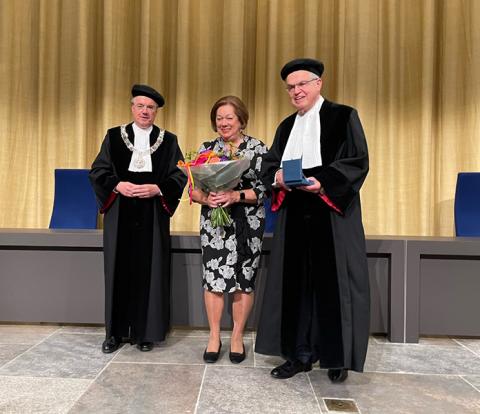 Rector Magnificus Wim van de Donk: “We pay tribute to Ernst who, both as a scholar and as an administrator (lately as the Vice-Dean for Research at Tilburg Law School), has dedicated his best efforts to our academic community. Passionate as a researcher and a lecturer, who, without a doubt, can be considered to be one of the leading professors of our university. In 2016, Ernst was already appointed as a university professor. He was the first Tilburg University professor to receive this honorary title. An impressive academic track record, great and long-term commitment to our university. Reason enough for the Executive Board to present Ernst with our university medal as a special token of our appreciation.”

Mayor Theo Weterings then presented Professor Hirsch Ballin with a royal honor: he was appointed Commander in the Order of Orange-Nassau. This is a high honor, expressing appreciation for his great services, both nationally and internationally in the fields of law and public administration. 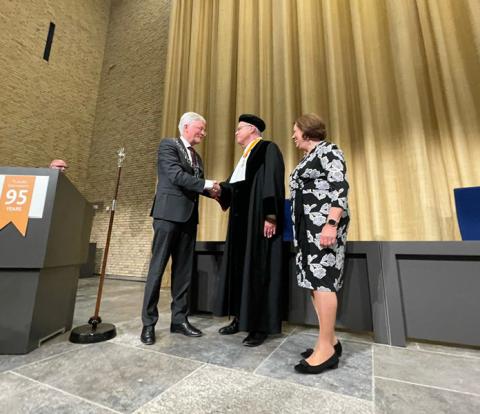 He has been of great significance to Tilburg University and the Netherlands School of Public Administration (NSOB) in The Hague. In addition, Professor Hirsch Ballin has had and continues to have many management and supervisory positions within various organizations in politics, public administration, and beyond. For instance, since 2014, he has been a member of the Netherlands Scientific Council for Government Policy (WRR) and has made important contributions to the WRR’s report on migration diversity. In addition, he holds many societal positions, e.g., he has chaired the Anne Frank Foundation Amsterdam since 2011 and has been the president of the Academic Council of the Gak Institute Foundation since 2014. Furthermore, he chaired the Supervisory Board of the T.M.C. Asser Instituut and the Board of the Achmea Foundation for many years.