On Friday, May 13, University Professor Prof. Ernst Hirsch Ballin will take his leave of Tilburg University with the valedictory address 'Peace and Justice'. In it he addresses an issue that has become dramatically topical since the Russian war of aggression: can the law bring about peace? Hirsch Ballin shows that political ideologies can stand in the way of effective enforcement of legal norms. He calls on the member states of the European Union to remain vigilant against the erosion of democracy and the rule of law. 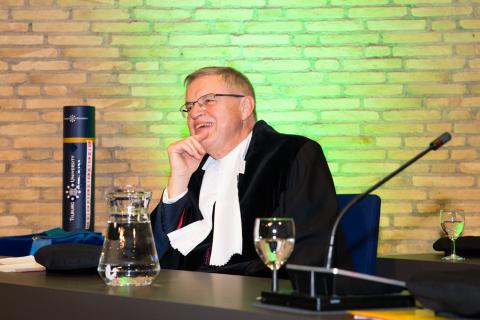 Since the 19th century, repeated attempts have been made to achieve peace through the law, but this has not prevented the two World Wars and many regional wars, argues Ernst Hirsch Ballin. World War II was followed by a paradigm shift in international law. The United Nations Charter and the Universal Declaration of Human Rights sought to bind international relations to respect and protection for every human being.

The subsequent international criminalization of aggression and other war crimes was a new attempt to bring peace closer through international law. Wars of aggression were outlawed, as was the use of cluster bombs and other weaponry that hit innocent civilians. However, political ideologies such as the prevailing Russian political ideology that place national sovereignty above international law stand in the way of effective enforcement of these norms. Acceptance of an international legal order that assures peace therefore depends on states having set themselves up as a democracy that respects the rule of law and human rights.

Political systems that make people vulnerable or protect them according to collective characteristics do not establish peace but mobilize groups as enemies of other groups and other countries. Therefore, the current war should not be a reason to be less vigilant against the erosion of the democratic and rule of law character of the European Union and its member states from within.

Prior to Prof. Ernst Hirsch Ballin's farewell address, Tilburg Law School will organize a farewell symposium on three main themes from his work: the methods of legal research in relation to human rights and constitutionalism; the space for lawmaking in a multi-layered legal order; and constitutional relations and the use of AI and algorithmic decision making.

The symposium is part of a two-day constitutional conference in Tilburg with the annual constitutional law conference of the Staatsrechtkring on Thursday, May 12, organized this year by the Department of Public Law & Governance of Tilburg University. The theme of that conference is Lawmaking in a hyper-complex society.

Ernst Hirsch Ballin (born in Amsterdam, 1950) concludes his work as university professor in Tilburg with this valedictory address. He started at this university in 1981 as professor of constitutional and administrative law. In later periods he taught international law and legislative issues, and since 2011 Dutch and European constitutional law. He received his legal training at the University of Amsterdam, where he graduated cum laude in 1979 with a doctorate in law in the subject 'Public Law and Policy'. At the same university he was part-time Professor of Human Rights from 2011-2020. Since 2005 he has been a member of the Royal Netherlands Academy of Arts and Sciences (KNAW).

His career in law was not limited to teaching and research. He held judicial positions in the Dutch Central Appeals Tribunal and the Administrative Jurisdiction Division of the Council of State, and duties in civil society organizations, including Cordaid. He was also a member of several advisory councils and advisory committees, including the Advisory Council on International Affairs until 2021 and currently the Scientific Council for Government Policy. Several times his academic career was interrupted by the fulfillment of political offices as Minister of Justice (1989-1994 and 2006-2010, the first period followed by membership of the House of Representatives, later the Senate) and Minister of the Interior and Kingdom Relations (2010).