In recent decades, the political order has been confronted by major cross-national developments in communication, technology, digitalization, and corporate activity. And amidst this volatility, the state is expected to provide security and equilibrium. When the political desire for perfectibility aims for cohesion in the world through state intervention, that desire becomes a dangerous thing, Professor of Public Administration Paul Frissen will contend in his farewell address on November 25, 2022. We would do better to see and acknowledge the fallibility of the world, and a little more modesty and a little less superiority thinking could help us with that. Which is why Frissen’s speech contains many examples of ill-conceived notions.

‘By giving examples of mistakes in my speech, I hope to draw attention to the idea of perfectibility as it exists in society, the idea that we can fix whatever is imperfect and incomplete. You see, we in this country have learned that large-scale interventions can keep the water out and so far that approach has worked wonderfully well. But that idea can backfire. In politics, danger lies ahead if we believe the world can be cleansed of all tragedy and that the state is the instrument to achieve that goal. I have devoted my entire professional career to studying the state. That state is precious to me, even if I know full well that it is as much a dangerous institution as it is a necessary one. It has a monopoly on the use of force, and that is precisely why we should not want the state to force ideas on us about the good life. A democratic state under the rule of law is a thing to be cherished; it protects all of us, in all of our variety, and that is what makes life beautiful. That is why we should leave as much as possible to society in the areas of social security, care, education, and well-being.’ 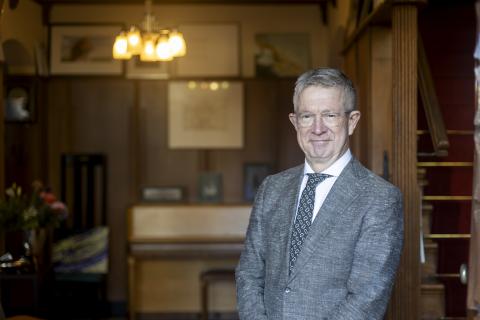 We must accept the fallibility of the world

Weren’t a hands-off government and increased civic participation the mantras of liberalism and the Rutte administrations that are now generally seen as having had undesirable effects?

‘Criticism of today’s neoliberalism is inspired by a simplistic dichotomy: market against government. Yet there is a sizable public domain between market and government. While it is true that in recent decades a variety of ideas about market forces and liberalism have become commonplace and have made their mark on debates, the role of the state has, paradoxically, grown much bigger. Consider some domains that have been privatized: telecommunications, infrastructure, public utilities. In those domains the role of the government as market supervisor has only become stronger. Care is a case in point: market forces have led to an explosion of supervision, bureaucracy, and regulation, and of course the tendering madness. And in its interventionist zeal, the government has also been asking the impossible of the care sector: lower turnover, lower demand, and lower prices. There is not a market in the world that can achieve all of that all at once. The number of government interventions has only increased, consuming nearly half of our income, and legislation has mushroomed. And now, as criticism is being leveled at neoliberalism and market forces, the government is expected to take even more control. And it is not short of funds to do so. Perfectibility expectations are widespread, but the effects will frequently if unintentionally be adverse.’

The Childcare Allowance affair shows how such a drive can go horribly wrong.

‘I found myself wondering what was behind officialdom failing in this case: was it evil intentions, or merely a radicalized outcome of the push for perfectibility to do the best job possible? I think the latter. Abuse had to be eradicated using algorithms that perfect the system. That has made me reflect on the question whether social security ought to be returned to society to be organized as it once was. The unions liked the idea. Today, control over care has been fully transferred to the state, where supervision ends in grim bureaucracy. We must accept the fallibility of the world. Therein lies its beauty. Politics must only be used to mitigate the negative.’

But how then do we protect vulnerable people in our society?

‘Before the Second World War, minorities found shelter in the socio-political segments, the pillars, they belonged to. Every pillar arranged its own education, clubs, care, and union representation. In the wake of the breakdown of this system, the notion of the controlling majority has caught on. Tolerance for departures from the norm has noticeably waned and has been replaced by a larger number of guidelines on what do to and think. This trend has also been helped by an increase in knowledge, technology, and diagnostic capability, which has led to a rise in categories that define normal. In youth care, 1 in 30 children used to need help, now that is 1 in 8. And that categorization trend is taking place in many areas: society is a lot quicker to label people impaired, to separate them. That fits a disciplining strategy that comes with views on what is “right and proper” and prevention-driven regulations about how to behave in accordance with the majority view. We used to have civilizing campaigns, now there is large-scale disciplining, based on the idea that if we all sing from the same song sheet, everyone will be happy. It comes with demands that others must think what the majority think and must be seen to act accordingly. Think of the compulsory rainbow bracelets. But tolerance works both ways. A multicultural society opens its doors not only to fun things like charming little restaurants but inevitably also to muslim fundamentalism and Bible Belters. This clashes with the secular, metropolitan mindset that deems itself superior and engages in pointless moralizing.’

The political order no longer has a narrative, it has policy briefs

Then how can we scale back the influence of the state and at the same time fill the gap in a narrative?

‘Today, knowledge and policy are crucially linked. Calculations and computations are assessed, and the resulting knowledge is shaped in models and policy documents. The political order no longer has a narrative, it has policy briefs. Yet the political order is primarily a symbolic order that enables us to display our differences and to try and mitigate conflicts through compromise. These days, farmers hold protests at a knowledge institution like the RIVM (National Institute for Public Health and the Environment), asserting that “your models are not ours”. And whatever we may think of it, populism does succeed in telling a mobilizing story. But a political merger of state and street is dangerous; power becomes overcrowded. We need authoritative institutions that exercise governance as moderately as they can to ensure an optimum of outcome variation. Interfering in citizens’ lives must be kept to a minimum; a neutral state accepts and protects social difference. The world is a pluralist place, and pluralism also comes in the shape of conflict, strife, and unbearable difference, but the crux of tolerance is to bear that unbearable difference. The only restriction is a democratic state under the rule of law, which at the same time keeps the unbearable peaceful. Civic freedom is the source of the world’s fallibility. That is the fundamental barrier to perfectibility. Democracy can only be understood from the perspective of our wish to be different, and in a democracy the state of being different is preferably presented to maximum effect. The protective barrier erected by the rule of law is the other person’s freedom. The state must make unpleasant decisions, carry out punishment, but the rule of law also protects citizens against that same state overdoing its interventions. Civic freedom also requires that many collective arrangements currently supervised by the state be taken over by society. Room for difference is crucial, and that implies our desire for cohesion and integrality must be curbed substantially.’

Paul Frissen has elaborated his ideas in a book that will be released by Boom in the spring of 2023. And he will continue to supervise his PhD students, one of the most enjoyable aspects of his office. ‘I have had a wonderful time at the university and at a fascinating department, even if in my experience here, too, more rules were introduced, while the idea of quality became diluted. Publishing only in English-language journals erodes our area. Language is not just a tool; in our field it is also an object of knowledge. Try translating a uniquely Dutch word like gedoogbeschikking – a decision by an administrative authority in an individual case to temporarily not use enforcement instruments against unauthorized activities – in a way that reflects its many political and cultural connotations. In this regard, we really have taken things much too far. There are many rooms in the house of science.’

Professor Paul Frissen will deliver his farewell address in the Tilburg University Auditorium on Friday, November 25, 2022, at 16:00 hrs. It will be livestreamed. The title of his address is De volle plek van de macht. De versplinterde staat voorbij. (The full place of power. Beyond the fragmented state.)

More on his farewell address

Do you have news or an event that you want to share with colleagues, students or external stakeholders? Please use the form below to help us get the information we need.