Bas de Lange is working for the UN in Congo

Bas de Lange (34), alumnus of Tilburg Law School, is working for the United Nations in Congo. Among other things, he helps to get children released from militias. "I am more pragmatic than idealistic. A true idealist would have a hard time in the world of the UN. You must be able to deal with different characters, including the warlords who lead the militias. In addition, it is crucial to always be diplomatic, even if you know that someone has committed hundreds of crimes against children."

Bas de Lange studied Dutch and International Law in Tilburg. From 2011, he has lived and worked abroad, since 2016, in the Democratic Republic of Congo, in the city of Goma. The UN has been in Congo since 1999. The goal of this peace-keeping mission is stabilizing democratic government, reconstruction, and safety for all citizens. "Freeing children who have been recruited by rebel groups is part of that," De Lange explains. He loves working in an international context, especially in the public sector. The hierarchy that prevails in the commercial legal profession does not appeal to him. With his work he contributes to the political goal of the UN in Congo. 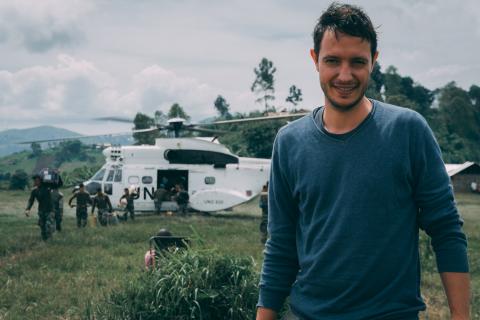 "But when we fly away in a helicopter after a conversation with a militia, and I see the released children sitting across from me, I realize that most of them have a better life ahead of them. That certainly gives me a good feeling".

De Lange has worked at the Department of Peace Operations for three years now. "It has a military and a civil component. I work for the civil branch, at the Child Protection Section."In Congo, between 150 and 200 militias are active, varying in size from 50 to 3000 men. Many militias were formed when many refugees came into the country during the war in Rwanda in 1994. The rebels have since protected their own communities. Many groups have recruited children, but De Lange indicates that the classic image of 'the kidnapped child soldier with a gun' is not correct. "There are certainly children who have been kidnapped, but many children help a rebel group for shorter periods and are thus not structural members of the group. Many groups are very well integrated into the community. And certainly not all children come into contact with weapons." He estimates that less than 50% of children is armed. The rest carries luggage, cooks, and cleans.

The UN concludes agreements with this type of militias. The department where De Lange works is in contact with 50 of these groups. "More than half of them have signed agreements in which the militias state that they will no longer recruit child soldiers. We check whether they follow the steps of the agreement and provide initial accommodation for the children." Then Unicef takes over the care of the children and tries to reunite as many of them as possible with their families. They are successful in 70% of cases. As a Reporting Officer and a lawyer, De Lange manages the database with data on the militias for ten field offices. "I make reports for the UN in New York and provide the various offices with information. Within the UN, we are constantly working to support our story with figures."

Through his work at the UN he has learned to better work together. "To organize a good field mission you have to be able to rely on your local colleagues who maintain contacts with rebel leaders and you have to work together with colleagues of the UN Army who are responsible for the security and logistical aspect of the field mission. I have developed myself from a reporting bureaucrat to a more hands-on field worker".

Signing an agreement to prevent the use of child soldiers and other abuse of children.

Friends among expats and the Congolese

Through his interest in the African continent and the situation surrounding the genocide in Rwanda and the Congolese wars that followed, De Lange has now lived in Goma for three and a half years. This city, on the Rwandan border, has one million inhabitants. "Goma is a nice city to live in. It is certainly not the green hell that many people seem to think it is. It is at an altitude of 1500 meters, just south of the equator and is situated on a beautiful lake. The temperature is always between 20 and 25 C°. With other expats, I live on a compound with surveillance. Still, Goma isn’t an unsafe city. As soon as it is light, you can go out for lunch with friends without any worries. Darkness sets in at six o’clock, from which time we are only allowed to travel by car." Apart from expats, he is also friends with Congolese people. "With a number of guards, for instance. They accompany me when I go running. Some of them went to Rwanda with me to run a half marathon." 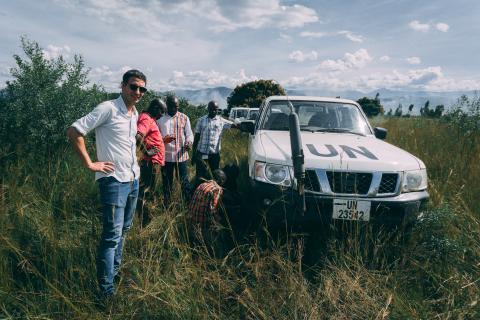 One of his duties is assisting the Child Protection Chief.  "I’m in charge, among other things, of the administration and the logistics around missions to visit militias. I arrange cars, helicopters, and the escort of UN soldiers."

Since October 2018, he has gone on missions seven times. "We landed with the heli in a field next to a church that was controlled by the militia. There we spoke with a representative, who first wanted to sound us out about why exactly we had come."

He made a grand entrance

De Lange and his colleagues subsequently met the rebel leader. He remembers as if it had happened yesterday. "He made a grand entrance, dressed in military uniform, with sunglasses, armed with a rifle and rounds of ammunition.’ Impressive? Yes, but then he was expecting a bit of a show. "Even though there are also leaders who come and talk to us impeccably dressed." 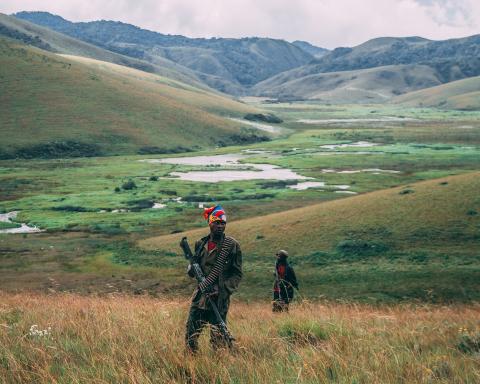 "In the coming years, the UN will continue to make contact with militias. An agreement not to recruit new children is a good first step, but ultimately the goal is to bring about a change in behavior within the community so that children are no longer seen as a source of easy-to-exploit help."

With the Human Rights courses that De Lange took at Tilburg University, he laid a solid foundation for his work at the UN. He learned everything about the theoretical framework. Working for the UN, he can see how it pans out in practice. He also indicates that the multicultural character of his studies was a good learning tool for fieldwork during a UN peacekeeping mission.  He is hardly ever in Tilburg, but enjoys being back for a while. "If I lived in the Netherlands, I would certainly attend the alumni meetings. Working for the UN has taught me the importance of networking and good contacts. An alumni association has an important role to play."

I had the feeling I had finally found my 'tribe’

In 2020, De Lange will sign a new contract. He will continue in Goma for at least another year. He does not see himself definitively returning to his home country just yet. "I do like to go somewhere different every few years. The first six months in a different country are always full of new things. I spend them building up my working and social life and I like to try new local food. In hindsight, I think that my Erasmus exchange experience at Lund University in 2008 has shaped my career path. I had the feeling that I had finally found my 'tribe'."

He explains that an international career including fieldwork makes it difficult to maintain a relationship. ‘There is always the uncertainty about what a new mission will bring. I'm now in a pool for civil experts of the Dutch Ministry of Foreign Affairs. This might get you a job within the EU, which would make it easier to travel up and down to see friends and family. I can see myself in a Western city like Geneva or New York ultimately, but going to Bangkok for the UN would also be really cool.’ 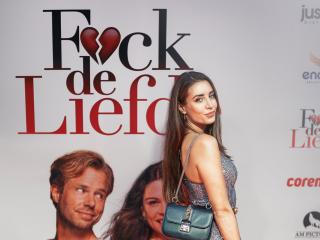 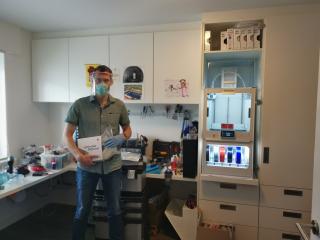 3D printers to the rescue during the corona crisis 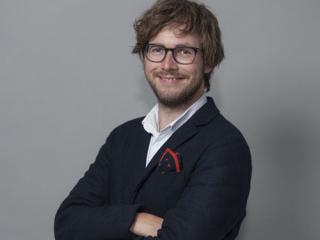