For nine days, starting on 29 April 1969, students were in charge of the Catholic University Tilburg, the later Tilburg University. The occupation had an impact that can still be felt today. A vanguard activist from 1969 meets two currently active students.

When Joost van Kommer told his father that he had decided to study at Tilburg, his father had already heard of it. “Ah, so you’re off to Karl Marx University,” he replied.

No such reaction came from the Veerle Pieters family when their daughter Veerle told them the same thing. There was no pink tinge to their response, anyway – not even in jest.

Ah, so you’re off to Karl Marx University 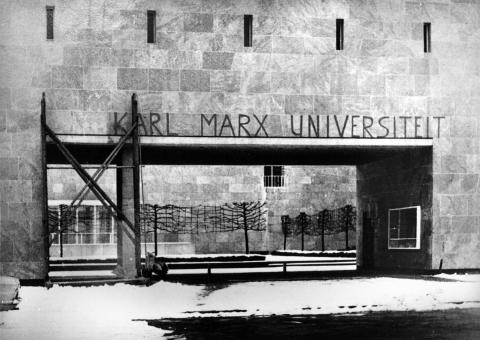 As for Joost and Veerle themselves, they had no idea of Tilburg’s reputation. Echoes of the events that had taken place 50 years ago on the modest university campus had never reached them in Otterlo and Raamsdonksveer. So off they went to study. But today, in April 2019, they pause to reflect at those places, in today’s much larger university, where history was, indeed, written. Frans Godfroy is their special guide. A first-hand story-teller – because he was there, during the nine days when about 1500 students occupied the Catholic University Tilburg (Katholieke Hogeschool Tilburg, KHT). In fact, Godfroy was a member of the most radical group, Left Front, at the vanguard of the occupation.

“Let’s not exaggerate. It was just a bit of student action in a provincial town in a small country,” says Godfroy (70). But: “It was also a celebration of democracy. Even if next to nothing came of our direct demands, in my own life the occupation was a key event.”

The impact of that event has not faded, and the massive student protest has been revisited again and again – especially now, on its 50th anniversary. There has already been a TV documentary, and a bulky book that placed the occupation in a broader perspective: Opstand in het zuiden (Revolt in the south). Godfroy has always been involved. He was co-author of the book. Now, too, by request, Godfroy – who made his living in critical journalism – is happy to turn up once again. “It’s my own fault for having been there.”

The Tilburg student battle was parallel to that of ‘the people’

Veerle (21, Public Administration undergraduate) and Joost (also 21, Business Economics undergraduate) lead Frans Godfroy through the building in which they spent most of their time during this study year. Together with seven others, Veerle and Joost represent student interests in the highest participation body at Tilburg University, the University Council. 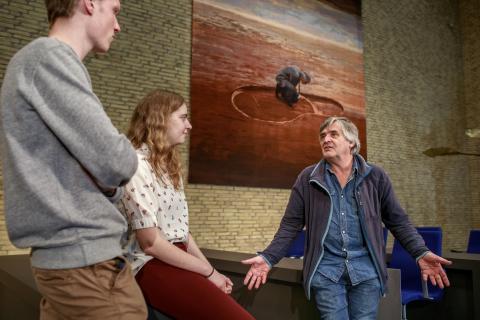 Above Esplanade, the campus grand café, are the rooms where their chosen groups SAM (Veerle) and Front (Joost) hold office. Free coffee. Godfroy, jokingly: “One of our own action’s achievements.”

In a meeting room they watch fuzzy black and white TV images of the occupation and the mass meetings in the auditorium. “It’s like a play!” exclaims Veerle. “It’s all men, in suits and ties. All smoking.” She’s exaggerating, but it’s hard to argue with the pictures. 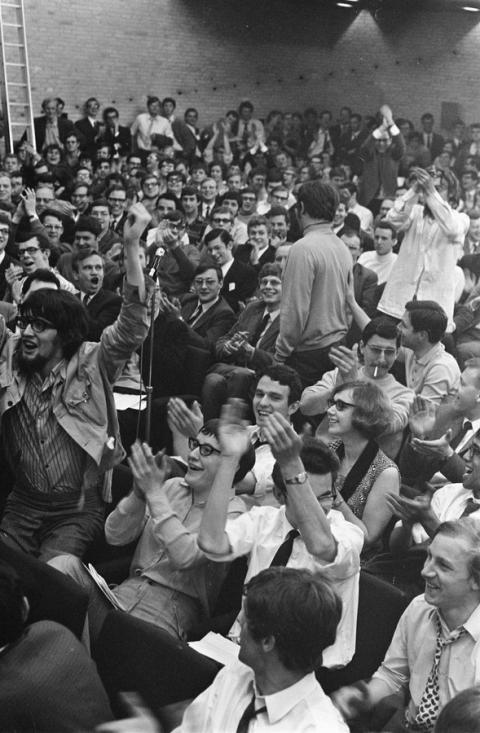 The two young students are now curious: what was it really like in April 1969? Did the atmosphere never turn sour? Godfroy: “In youth revolts the year before, in Berlin, Paris, and the US, we’d seen a lot of violence. So we knew it could happen. We had to live with the idea that they might come and drag us out. But in the end they didn’t dare.”

“Was there an old boys’ network at the university in those days?” asks Veerle. “There’d always been one,” comes the answer. “If you went there to study, and you had the right contacts, the job was pretty much yours. Networking has always been around.”

Fifty years ago the Tilburg web was spun with Roman Catholic thread. The curatorium, as the university management body was then called, was led by the chairman of the Catholic Employers’ Association. “That’s a perfect example of how one-sided everything was,” says Godfroy. “Yes, that left its mark on education, too.

Within the Catholic church there was a huge battle going on between progressives and conservatives, and that battle got fought here too. Like many of the other students, I’d previously attended the seminary. We’d all shout: ‘where are the employees?’”

In February 1969 the famous letters had graced the facade in red lead paint: Karl Marx University

The university had to get used to the idea that an academic education was no longer the preserve of children from well-off families, and that any youngster with a good set of brains could get in. And those brains were bursting with one new idea after another... Everything needed to change, and everything was political. The Tilburg students’ battle was parallel with that of ‘the people’.

So it was logical that visitors to parties in the city center on 30 April, Queen’s Day, were handed a special edition of the Tilburgs Algemeen Studentenblad (TAS). Written and printed through the night, by Godfroy and others.

He sees those nine days as a turning point. “The occupation was a catalyst for something that had become inevitable. Every now and then something like that happens.”

In 1969 the Tilburg occupation put it in the eye of the hurricane, more or less by accident. There had been no prior plan. Students were agitating all over the country, but calls for the democratization of education actually seemed to have faded a little. 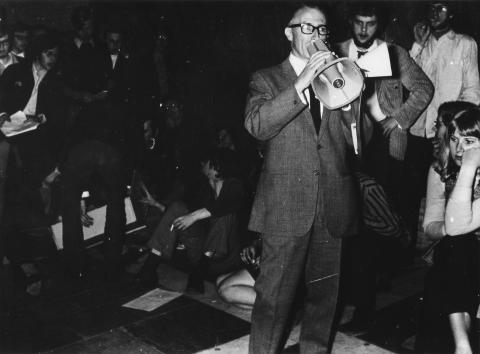 The occupation was a catalyst for something that had become inevitable

Photo: Rector Cees Scheffer announces that the university will be closed. It is the fuse that lights the powder keg.

At the Catholic University of Tilburg the temperature had been rising for some time. A series of sit-ins and teach-ins (lengthy discussions) had fanned the flames of rebellion. And the famous letters had already graced the facade, in tough red lead paint, for two months: Karl Marx University. And a sit-in was easy: fill the narrow corridor alongside the auditorium in what was then the university’s single building, through which everyone had to pass, and block it.

“Did half of the students really take part in the occupation, at such a small university? I can’t imagine that happening now,” remarks Joost van Kommer. This elicits a question from Godfroy to them both: is there still activism on campus in 2019?

By chance, the week after their meeting there would be Business Days at which students could meet possible future employers. Shell would also be there, and thanks to their role in the climate debate, among other reasons, their presence was causing controversy. A group of students was arguing that the company should not be admitted. In vain, it must be said.

Joost: “Students today think they can make a difference just by signing an online petition, but they’re reluctant to actually sacrifice anything for an ideal – like missing an exam, for instance.” Veerle: “A global problem like Shell is going to drag on. But as a group we’re less well placed to take action. Everyone wants to get a job as quickly as possible; they don’t want their studies to take a year more than necessary.”

As students they may not be particularly activist but they are certainly both active. As members of the University Council they have a paid year of office, which they both feel will also be of future benefit. It’s a good way to know what’s going on, says Joost. “I was in the bubble of St. Olof, a student corps, for a long time; this is broadening my perspective.” “And perhaps,” adds Veerle, “less is achieved with activism than how we’re doing things now.”

They’re doing things now through consultation. Joost: “We’re very close to the Board. One call to the secretary and we’re sitting around a table.” Veerle: “We’re continually communicating in order to get things done; we speak alongside staff delegations in committees and in day-to-day management meetings. And that’s where most of the work is done. The University Council itself is more for show.”

Doesn’t that mean you’re too easily hemmed in? asks the 60s activist, but Veerle doesn’t think so. “We know the Board’s agenda, and we won’t let ourselves get sweet-talked. Like last year, for instance, when the Board wanted to have the university grow too fast. If we threaten to hold up the budget, they have a real problem. We have quite a bit of power; don’t underestimate it.”

And do they know who they’re doing it for? “It’s hard to know what the average student wants, but we do try to find out.” Not with teach-ins but with polls, surveys, and ‘input evenings’. “And there are about 500 people actively involved in participation.”

That might not sound like very many, given that Tilburg University has 16,000 students in all. But times have changed. And it’s not that easy to explain to a growing number of Chinese and other international students what you’re fighting for. The fight might also have been easier to organize in 1969, with only a couple of thousand students.

Nevertheless: the two have respect for what happened in 1969. Frans Godfroy ends his short, spontaneous tour of the ‘places of remembrance’ at the telephone exchange. A tiny room – but that’s where it all started on 29 April 1969. Veerle: “Nine days of occupation. It’s a good story all right.”

Do you also have a special memory of your time at Tilburg University? Share it with us

This article by Ben Ackermans first appeared (in Dutch) in the Brabants Dagblad of 27 April 2019, on the 50th anniversary of the occupation of the Tilburg University. 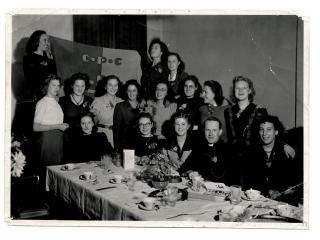 "What do you think, spring flower?" 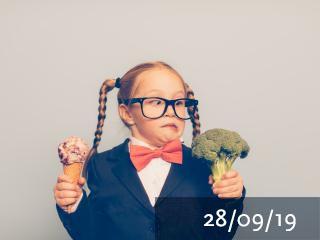 Back to Campus: Healthy Choices 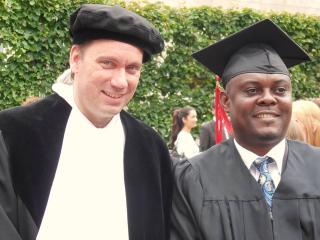