Coronavirus crisis calls for a new “together,” the new common

Professors provide insight into the effects of the COVID-19 pandemic

On Saturday September 19, the imposing LocHal was the setting for the book presentation of The New Common: How the Covid-19 Pandemic is Transforming Society by initiators Emile Aarts, Hein Fleuren, Margriet Sitskoorn and Ton Wilthagen. In line with the context of the new together, the vast majority of the audience attended the talk show from a distance via video.

Book 'The New Common: How the Covid-19 Pandemic is Transforming Society'

In thematic rounds, a varied group of scientists and representatives of companies, government organizations, and social institutions gather at the table. Led by Simone van Trier and Nathan de Groot, they talk to each other at an appropriate distance.

The kick-off for the debate is for two initiators of the book, Ton Wilthagen and Margriet Sitskoorn. They exchange ideas with Tilburg Mayor Theo Weterings and President of Interpolis, Chantal Vergouw. 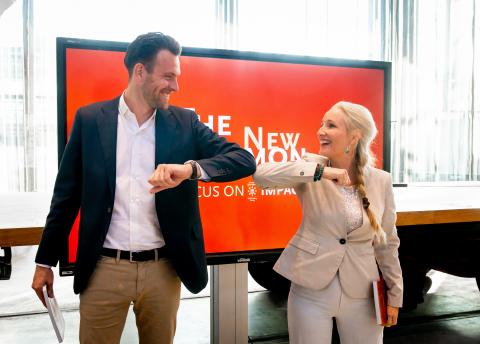 We have to enter into new social interactions with each other, choose new ways of working

A book with a mission as a starting point

Ton Wilthagen starts with the book's mission to sketch a positive perspective for the new together, not to be confused with the imposed rules of the new normal. "We look towards accepting a new together. We don't want to focus on what can't be done right now. With this book, we are starting a program of thinking and doing, and, as a university, we want to contribute to an action perspective for society. The book is a snapshot; the program develops from this point." Margriet Sitskoorn emphasizes that the choice for a positive starting point is a conscious one. "We are looking for a bright future together, without denying reality. We have to enter into new social interactions with each other, choose new ways of working. And a great appeal is also made to our own abilities to do the right thing. Our brains have to adapt to this as well."

"It is important that we continue to experience support"

Theo Weterings and Chantal Vergouw are the first ones to receive the books. Theo Weterings thanks the university for its efforts to put this topic on the agenda in this way. He also gives his vision on how the city of Tilburg is doing. "The city is doing well, but people are struggling with the measures and with their own behavior. The rules we have to abide by are unnatural. It is not in line with how we behave as people, but still it's important that we as a government continue to deliver that message. I myself am curious how long we can keep this up and what we as a government can do to keep motivating people. After all, we don't know when it will be over. And it is also important for us as administrators that we continue to experience support. If science thinks along with us about this in order to travel this the long way properly, then that's good for society".

"The city is doing well, but people are struggling with the measures and with their own behavior"

Chantal Vergouw says on behalf of Interpolis that it is good that Interpolis embraced the new way of working a long time ago. "Trust plays an important role in this fluid situation. But we too are searching, there is uncertainty and employees do not always feel good. From the current situation, we are not going towards a re-start but to a re-set. What is the beckoning perspective and what do we have to do about it? I am curious how we can learn from science to embrace the situation, as a basis for progress."

Look ahead to “how to go from here”

In conclusion, the presentation duo turns once again to Ton Wilthagen and Margriet Sitskoorn and asks them to look back at the afternoon and look ahead to “how to go from here.”

Ton Wilthagen: "You can see everyone's desire to have contact offline. At the same time, we also conclude that the use of online tools has a lot more potential and that we can achieve an enormous scope with them. It offers a lot of perspective. And at the same time, bringing back offline life requires a solid piece of social engineering.

We see the vulnerabilities of our society more clearly than ever, a vaccine does not solve that. In the first few months, everyone was willing to do anything; that is something deep inside people. The fact that people are no longer able to keep it up is also due to the fact that there is not always more room to show solidarity. Life at home continues, everyone is working. Our priorities have changed. We still have the desire for solidarity. In order to guarantee it, we have to institutionalize it. In addition, we need to move towards a broader notion of prosperity. In the old economy, things of value had a price. And nowadays only everything with a price has value. We really need to take a broader view of that. About this afternoon: this is the new common of Tilburg, here in the LocHal. We would like to continue this new common in a programmatic way and in co-creation with society.

Margriet Sitskoorn concludes: "We started this project with a book as a starting point. Everyone wants to participate; there is a lot of knowledge and more than enough talents. We therefore make an appeal: apply your knowledge to the new situation so that we can build something together. We can move forward together and that is exactly what we are doing now.”