Wilding The Garden: growth in the first months

Sophie Vrijdag monitors the piece of wilderness on campus. She shares her findings on developments over the past three months.

Read more about the project 'Wilding the Garden'

"At Tilburg University, the Wilding the Garden project began in March, happily coinciding with the start of spring, and early changes in the garden were testament to the reputation of spring as the season of rejuvenation and growth. Blades of grass were beginning to pop up in the churned soil. As the garden was no longer being tended and no bulbs had been planted, the garden was evolving at its own natural pace.

April warmth made itself felt in the garden, too. The green in the garden started to expand and the bare soil slowly began to fill out. Birds and insects that were initially shy to venture out began to explore their new and changing habitat in increasing numbers. A variety of birds were foraging for food in the soil.

The month of May witnessed a strong growth spurt. The weather undoubtedly helped: the sun’s caress gave new green shoots a boost, and the seeds and buds that had so far lain dormant now appeared to come out of hiding.

It is now June, and the garden continues to grow. The free play of sun, rain, and wind will show what nature, free of human intervention, is capable of achieving." 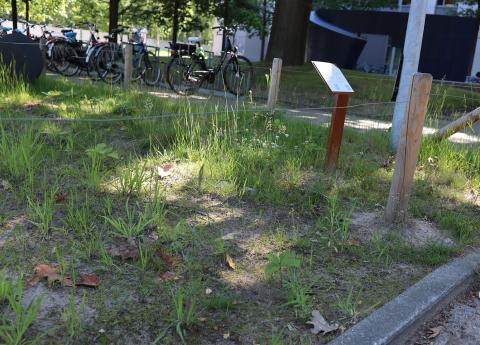 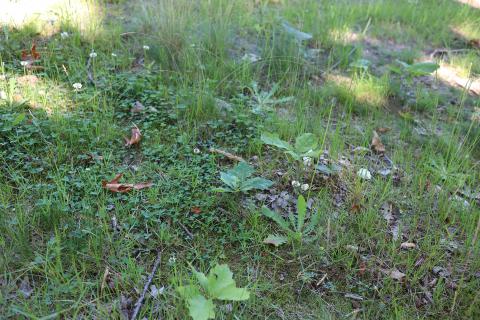 The piece of wilderness also has an effect on Sophie herself.  "As the garden evolved, some things occurred to me. I realized that while all around us speed is being trumpeted as good and essential – faster Internet, faster cars, faster streaming – nature doesn’t care about any of this; nature takes its time. After a full and busy day of classes, it is soothing to just stand at the garden for a while, taking it all in, experiencing the beauty of serenity. I was struck not only by how peaceful nature is, but also by how at peace it makes me feel. I can honestly and universally recommend seeking out nature more often – and that includes visiting the garden: lacking maintenance inside its fencing, it truly retains its natural character."