Students4Students (S4S) Tilburg continues in a different form. A good moment to ask outgoing board members Lizan Cuma, Mané Kirakosian, and Jamie Piroe what drives them and which skills they developed working for their student community. They concluded their term on the board in June by launching the Super-diversity learning module.

S4S Tilburg is part of the national Students4Students program of the Ministry of Education, Culture and Science, and its objective is to encourage diversity and equal opportunities in education. S4S Tilburg boasts some 40 student volunteers who are supervised by a paid board. They plan and run projects for children aged 9-14 years with a migration background and for children in disadvantaged districts in Tilburg.

The volunteers, mainly international students, act as role models by, for example, telling elementary school children about their backgrounds and by explaining what it is like to go to university. Setting up and testing the Super-diversity learning module is the last project of S4S in its current form; as of the 2022-2023 academic year, S4S will probably become part of the MOVE Foundation. This, too, is an organization that runs volunteer projects. MOVE used to be a social partner of S4S, as was IMC Weekend School. “Through MOVE, S4S can reach even more schools, both elementary and secondary schools. It’s a good way forward,” secretary Mané Kirakosian (24) contends. 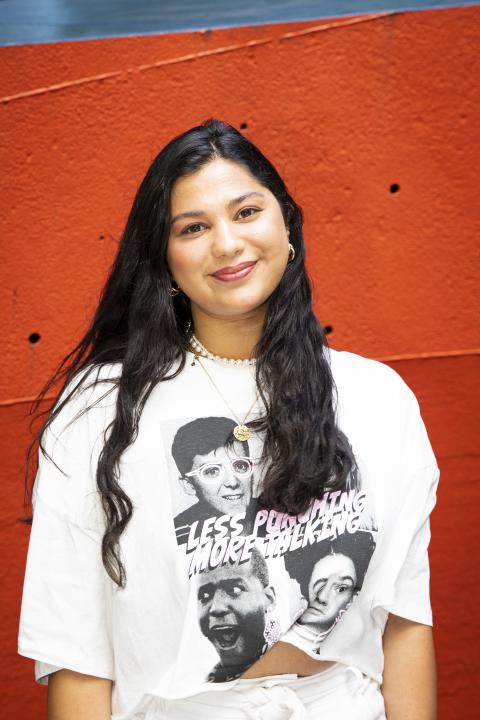 I am eager to show children from non-Dutch background that a university degree is an opportunity for all, regardless of background

An academic education is an opportunity for all, regardless of background

She continues: “We, the three board members, have non-Dutch backgrounds. That’s how we know how to connect with our target group.” Art & Media Studies Master’s student Mané is originally from Armenia, but she grew up in Etten-Leur. “I know what it is like to speak a different language. When I speak Armenian, I feel good; it makes me feel at home. I am eager to show children from non-Dutch background that a university degree is an opportunity for all, regardless of background.”

The aspiration to be meaningful to others

Research Master’s student and S4S chair S4S Jamie Piroe (28) grew up in Barendrecht and has Surinamese parents. After finishing her prevocational secondary education, she completed a secondary vocational program in 30 weeks. She went on to study Commercial Economics at Rotterdam University of applied sciences and took courses at the University of West Florida. She also lived in New Zealand for a while. After returning to the Netherlands, she entered a Pre-Master’s program in Marketing at Tilburg University. “I found myself wondering more and more whether I still wanted to go commercial. My aspiration to be meaningful to others became increasingly stronger.” She transferred to the Research Master’s program in Linguistics and Communication Sciences. But it’s not just through her studies that Jamie wants to contribute to society. “The vacancy for S4S chair appealed to me because of the prospect of working together with social partners.”

My aspiration to be meaningful to others became increasingly stronger 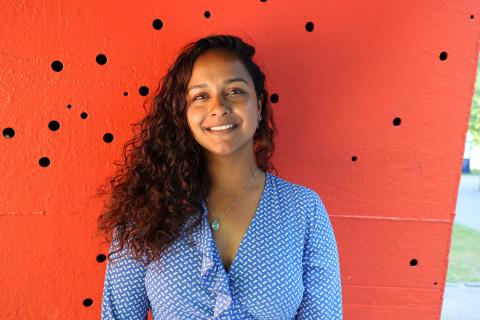 School mentor as a major source of inspiration

Lizan Cuma (22), S4S treasurer, is set to graduate with a Bachelor’s degree in Public Governance in the summer of 2022. “At my prevocational secondary school I did a higher education career test just for the fun of it, because I couldn’t find a fitting secondary vocational program. Public governance turned out to be a perfect fit: I was involved in the community, often took the lead, and as chair of the student council had gained experience in thinking about complex topics. My mentor urged me to go for a preuniversity school degree, because he was confident I could do it. That was a tremendous motivation.” She opted for a slightly different route: after completing the second level of higher secondary education (HAVO), she did the first year of the Public Governance program at a university of applied sciences and in this way qualified for the Bachelor’s program in Public Governance at Tilburg University in her hometown of Tilburg.

The drive to make a difference

In the first Covid-19 lockdown, Lizan lost her part-time job at a telecommunications store. “I started looking for a job that was more of a match with my studies, so I checked out the openings on the university’s website. S4S spoke to me so strongly that if I hadn’t been offered the board position, I would have become a volunteer.” For her, the drive to make a difference is part nature, part nurture. “My parents, who are Kurds, fled Iraq. They taught me and my younger brother a great deal about the history and culture of the Kurds.” Her position on the board concerned both S4S and MOVE. “I put in eight hours a week at each organization, working hard to bridge the divide between cultures. Promoting and furthering the cause of inclusiveness matters a lot to me.” 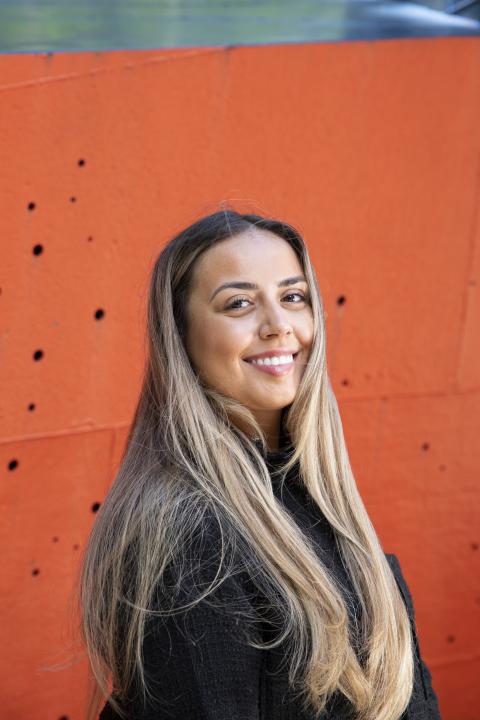 S4S spoke to me so strongly that if I hadn’t been offered the board position, I would have become a volunteer

The Super-diversity learning module was created by researchers Dr Rian Aarts, Professor Jos Swanenberg, and Dr Max Spotti of the TSHD Department of Culture Studies. Mané: “The researchers made short informative videos about a number of topics, including culture, multilingualism and diversity at school. We have made assignments and questions to accompany these informative films, so that it became a fully-fledged teaching package for elementary school. In this way they can work with the subject of diversity in the classroom in an accessible way. One of the assignments we developed was for children to make a language portrait of themselves, to map out which languages and dialects they speak. They discussed the portrait with their classmates, so they could learn from each other’s backgrounds.” Mané argues that all children ought to be aware of super-diversity in the Netherlands. “The learning module shows that super-diversity enriches our society and that we should be proud of it. And I hope it will generate more understanding.”

The learning module was launched at Junior University and at Night University in June. Mané: “The three of us did this together, as the board, and the response was positive, from both parents and children. They liked it and found it useful.” Lizan adds: “The international students of the internationalization project I set up on behalf of S4S also felt the videos were fun and useful. I will of course continue to use the learning module in projects.”

More faith in others

Lizan and her fellow board members learned a lot from working for S4S. “Setting up and supervising projects has taught me to take responsibility. I initially struggled to find a balance between letting others take charge of things and being ultimately accountable, and I would end up doing too much myself. I have certainly grown. I now know which types of students I can let go and which ones I need to keep an eye on. I’ve become more flexible and better at contributing ideas and giving feedback. If that’s how I can help someone grow, that to me has great value.”

I have learned that not everyone thinks and works like me. At first, I wanted to be in control as much as possible, but I have learned to have more faith in others and to give them room to grow

Chair Jamie concurs. “The biggest steps I have taken are in leadership. I had some management experience in hospitality, but that was a straightforward hierarchy. The board of S4S consists of like-minded equals. I found it hard to lead within the board, because the others are no less competent than me. I have learned that not everyone thinks and works like me. At first, I wanted to be in control as much as possible, but I have learned to have more faith in others and to give them room to grow.” One of the things that drives her is freedom. “It makes me happy to think and act freely, and I find that both at S4S and in my Research Master’s program. My supervisors inspire and encourage me to research what I like, and at S4S, too, I had a lot of freedom to plan projects.” Mané learned a great deal about dealing with children and about teaching. “I have learned to use class management techniques in a full classroom and to improvise when a topic wasn’t of particular interest to students. I found it hard to be strict with students at first, but I have learned that sometimes it is necessary.” 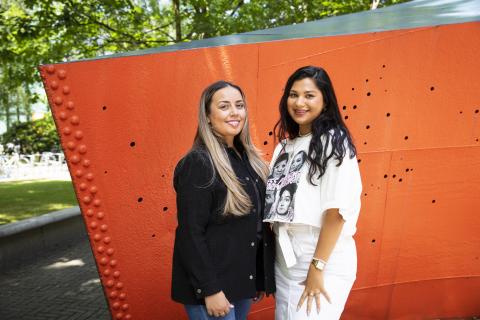 Lizan and Mané will stay involved in the new S4S for a while. “I’ll keep working at MOVE, in part as advisor to the new S4S,” Lizan says. In September 2022, she will start the Master’s program in Public Sector Management in Rotterdam or The Hague. “I have opted for this program, because it covers management and because working in the public sector isn’t about sales and profits, as my job in the store was.” She does not yet know whether she wants to work as a manager in a hospital, prison, or school. “I’m impulsive; if an opportunity presents itself, I’ll go for it. In any case, this degree program will be the capstone to my academic career.”

I will also continue to teach. Children are very grateful for all the information they are given; they are open, ask a lot of questions, and are eager to learn despite the language barrier

Mané is completing Master’s program in August and has started looking for a job. “I click with students and I work well with teachers. That’s why I think it would be fun to work at a school, for example a university of applied sciences.” She, too, will stick around for a little while to help the new board settle in. “And through IMC Weekend School I will continue to work for child refugees. I will also continue to teach. Children are very grateful for all the information they are given; they are open, ask a lot of questions, and are eager to learn despite the language barrier.” Jamie will leave Tilburg after graduating. Her PhD project, a follow up to her Research Master’s program exploring behavior in relation to climate change, is taking her to Australia[ST1]