Farewell interview with Klaas Sijtsma: “Science sometimes feels like a long stumble in the dark”

Measuring is of the essence. That is the golden thread that runs through the career of Professor of Psychological Research Methodology, former Dean, and former Rector Magnificus Klaas Sijtsma. But he didn’t catch on to that at first. “Just like becoming good at statistics takes a lot of experience, it takes time to figure out what it is in your work that truly matters to you.” In May 2022, Sijtsma said farewell to Tilburg University. He looks back on an eventful career as troubleshooter, crisis manager, and champion of measuring, public access to science, and the indispensable involvement of statisticians in research. 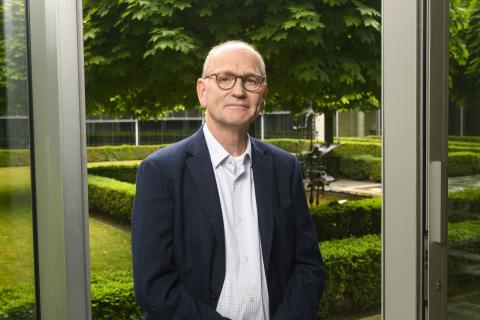 In his years as a professor, Dean of TSB, and ultimately as interim Rector Magnificus, Klaas Sijtsma seemed to be up for any challenge that came his way. And plenty did: from cheering up and reassuring nervous students if they failed to understand the statistics he taught to replacing a Dean who engaged in fraudulent dealings and steering the university through the Covid-19 pandemic. Sijtsma himself is modest and matter-of-fact about his achievements: “It certainly wasn’t a dull time but then I have always enjoyed my work. I have had very little to complain about. It almost felt like playing in the park on a salary.”

Sijtsma started his career studying pharmacy in Groningen. Life in a lab wasn’t for him, though, but he did like the hard science about it. The earliest roots of psychology can be traced to physics, and various other exact sciences have exerted a strong influence on it. That made transferring to this academic discipline not as odd as it may seem. “That early history explains the long tradition of measuring in psychology, and it was that aspect that appealed to me enormously. That’s how psychometrics became my trade: studying the mathematical and statistical requirements for data collected through psychological tests and questionnaires in order for these tools to be used to measure psychological characteristics. This is where all my interests converged.”

His ambition to impress on students and fellow scientists the importance of measuring springs from his personal interest, but spreading the word is also much needed, Sijtsma observes. “A great deal of work needs to be done to improve scientific, empirical research. To give but one example, in my view a great deal of research today is overly data-driven. I believe research should be driven by theory, which subsequently, in small steps and in interaction with empirical research, is made to evolve. Theory determines which data must be gathered, and it is high-quality measuring that yields good data. This dimension has been lost sight of because of the low-threshold availability of large online data sets. That’s a shame and it really ought to change.”

It is sometimes erroneously found that the education program for statistics is below par, but the ability to do statistics well requires experience no 20-year-old could possibly have

“Things do go wrong in other ways: very rarely excesses occur that harm scientific integrity, like when Diederik Stapel was found out. But such excesses are outliers. If in practice something does go wrong, it is hardly ever because of foul play. Failures are mostly the result of a lack of statistical experience. I see two options to safeguard the quality and integrity of science. The first is this: when in doubt, consult a statistician. And second, ensure the highest possible level of data accessibility. The university can encourage this behavior in researchers by including it as a target in their employment contracts.”

A passion for measuring and statistics isn’t for everyone. “Most students find statistics scary. Statistics requires a great deal of practice to become good at it. It’s a matter of experience and it takes a lot of time to become experienced. Students really don’t have enough time to become experienced, but the same goes for researchers who have not specialized in statistics. For years I tried to reassure students, but I’ve given up,” Sijtsma says with a smile. “They simply find it daunting, and it is hard, there’s no denying that. Still, I hope I’ve given them a little nudge in the right direction. Regrettably, review committees don’t always appreciate that doing statistics well requires experience which 20-year-olds simply cannot have. Committees tend to find that statistics is not being taught well, but that finding is wrong. The educational program is fine; it’s the learning pace that falls short of expectations. Patience is a virtue, both in education and in science. Our default expectation should not be greatness or perfectibility. Science is essentially a long stumble in the dark, and it's only so often that an opportunity arises to make a useful contribution. And when it does, that is a wonderful thing.”

“I set great store by making students and future researchers understand the importance of measuring. And in some ways, I think I’ve been successful: many generations have had the importance of measuring instilled into them through a textbook that first appeared in the 1960s and which I revised in the late 1980s and again in the early years of this century. It sells well, it is much used, and in the publisher’s book it’s a bestseller. I have also had the privilege of successfully supervising 34 PhD students. Four more are currently working on their theses, and they, too, will make it, I’m sure.”

I am proud of all my PhD students, including the four I am currently supervising. They, too, are doing a great job and I’m confident they’ll make it

Klaas Sijtsma took office as Dean of TSB in 2011 after it had transpired that his predecessor, Diederik Stapel, had fraudulently used data. A dark chapter in the history of the university and of science generally. One decade later, the world was caught in the throes of the Covid-19 pandemic just after Sijtsma had taken up the reins of office as interim Rector Magnificus. “That’s a tough break,” he was told. His response was characteristically matter-of-fact: “True. As it is for the rest of the world.” But in retrospect, these two periods presented the biggest challenges in his career. “Luckily, crises also generate good things. People have tremendous resilience, flexibility, and zest for work. As a School, TSB has emerged from the Stapel crisis much stronger. And in 2020, online education was operational in no time. That crisis has not yet been defused, though: the virus has not gone. Our main concern was and remains: how do we get the organization functioning properly once again? Is this new reality for the best for students and lecturers? Working from home and distance learning weaken the cohesion within the organization. Informal contacts, working together, listening to others, understanding you can’t always have it your way, resolving conflicts – these are skills that cannot be learned sitting at home facing a laptop screen. This is an enormous challenge for the incumbent Executive Board.”

What does the future hold in store for Klaas Sijtsma? “For the next five year I have a guest appointment, and I continue to supervise PhD students. I also co-chair the scientific integrity committee at Erasmus University Rotterdam; a prestigious position whose mandate I hope I will never have to perform, because that would imply something is going on. And I intend to do and publish research together with colleagues, both at home and abroad. I will carry on until I’ve had enough.”