In its GreenMetric ranking, Universitas Indonesia (UI) has ranked Tilburg University as the Most Sustainably Improved University. The UI GreenMetric ranking, which was launched in 2010, compares universities on their sustainability performance, with this year’s edition featuring more than 956 universities from 80 countries. In just one year, Tilburg University has improved its ranking from 221st to 80th, earning it the title of ‘Most Sustainably Improved University’.

On December 14, Sustainability program manager Marieke de Kort accepted the award on behalf of Tilburg University in an online ceremony. Vice-Rector Magnificus Jantine Schuit voices the response of the Executive Board: "We are proud of the rapid increase in the field of sustainability. We owe this award to the program 'Towards a Sustainable University'. In the coming years, sustainability will continue to be an important component of our strategy. This award encourages us to move forward and to continue to invest in a sustainable university. Our ambition is to do even better." 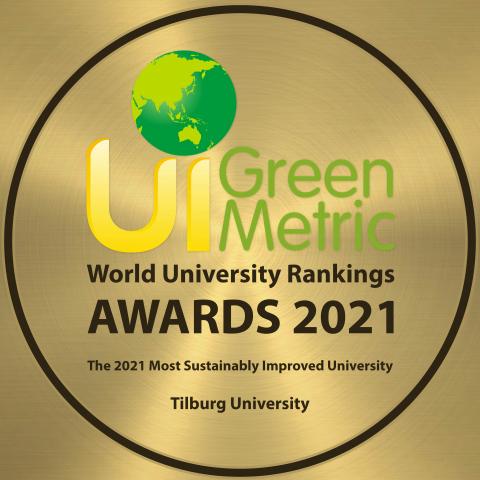 Every year, universities fill out an extensive questionnaire about how they progress regarding the following themes: setting & infrastructure, energy & climate change, waste, water, transportation, and education & research. The ranking also looks at the budget universities expend on sustainability. One of the reasons Tilburg University’s ranking has soared this year is that a central sustainability program monitors its performance on several themes and identifies necessary changes. Another reason is that more data were extracted from the systems than in previous years. These features enabled Tilburg University to submit more results to UI GreenMetric.

Submit your ideas or questions through: